+ When The Misfit says "She would of been a good woman, if it had been somebody there to shoot her every minute of her life."

+ In Kafka's "The Judgement" when the father shouts that he does indeed know the friend in St. Petersburg and has been secretly communicating with him and then says "I've been representing him here on the spot!" Such a hilarious line.

+ Johnny Rotten screaming "We are ruled by none.... ever... EVER... EVER!!!" and then the awesome guitar riff drops. Say what you want about the Sex Pistols, but this is perhaps the most punk rock moment in the history of music.

+ Brian Eno singing "You've got to make a choice between the Paw Paw Negro Blowtorch and meeeeeeee." Although people look at you funny if you sing it to yourself.

+ The way Achewood characters speak. It is hard to explain, but the majority of the humor for me is in the quirky phrasing the characters use. Take when Teodor explains why the couch wanted to be shipped to china, it is the couches retirement:
Teodor: "Now, maybe if you learn Chinese just good enough, we can visit him someday!"
Phillipe: "Aw, why learn Chinese just to go bug a guy! Let's don't and say we did!"

+ Henry Fonda as Frank in Once Upon a Time in the West, the greatest western villain ever. Also, this exchange.
Morton: Not bad. Congratulations. Tell me, was it necessary that you kill all of them? I only told you to scare them.
Frank: People scare better when they're dying.

+ Sonic Youth's "Expressway to your skull"

+ T-shirts with joke phrases on them are of course lame, but I approve of T-shirts with large font phrases like "WHAT THE HELL PEOPLE!?", "THAT'S WHAT'S UP," and the like.

+ Zoidberg: "Your music is bad, and you should feel bad!"

Posted by Lincoln Michel at 6:07 PM No comments: Links to this post 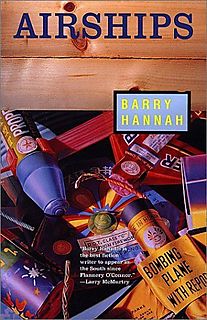 Barry Hannah - Airships: I can always tell a great book by the fact I'm constantly thinking of bits I'd like to steal while reading. By that criteria, reading Airships was like being tossed in the APC store at night without any security around. Okay, bad analogy. Airships is a collection of stories about war, sex, airplanes and horses. The usual, but done with incredible style and energy. I find that far too much modern short fiction is so polished and calculated it comes out as a dulled diamond (or more often polished stone), but Hannah's work is full of the rough, gritty, loose writing that draws you in like possessed jungle vines and then you get attacked by a Panther or something. A few of the stories fall short and at least one didn't work at all for me, but I'll still give it a big ol' A+.

Elizabeth Hardwick - Sleepless Nights: In this "novel," Hardwick writes a series of highly autobiographical vignettes tied together by... well nothing except her voice. The prose is, for the most part, excellent and this is a great book to pick up and read for a few pages to get your juices flowing. However, reading all these mostly unrelated fragments together gets repetitive and leaves you wanting something a little more coherent. If its going to be this loose and thin, why not just make it a series of prose poems instead of a novel?

Flannery O'Connor - A Good Man is Hard to Find: O'Connor was a deeply Christian person, but her stories are so dark and twisted that they read like dark parodies of Christianity. I love it.

Cormac McCarthy - The Road: Blood Meridian is one of my favorite books and I was hoping to get a similar post-apocalyptic epic written in beautiful, mezmerizing, biblical prose. It is more the first and less the later. McCarthy dips into full on apocalyptic mode instead of just hinting at it, but his style has moved away from the amazing prose of the past. His new style is sparse and repetitive. The rain falls. The sky is grey. Ashes are everywhere in the grey sky and the falling rain which falls from the grey sky on the ashes. You get the idea. Although the prose is not nearly as captivating as Blood Meridian or other older McCarthy works, the new style works here to drill in the wasteland and the despair of the characters. This was a quick grim read and I'd recommend it. It does, however, have the worst Chip Kidd designed cover I've ever seen.

Philip Roth - The Facts: Philip Roth is undoubtedly one of the 20th centuries best authors. He is also a fairly interesting figure and much of his best work is highly autobiographical as such, it is inevitable that people are interested in the "truth" of his life and what really happened. Roth obliges here, mostly, giving us an account of his life (only up until the publication of Portnoy's Complaint though) that seems quite true, but written in a way that feels novelistic and as if Roth was writing in the voice of another character. Then he bookends the autobiography with his fictional counter part, Zuckerman, commenting on the text and pondering the nature of truth, autobiography, etc. The metafictional idea works to be both gimmicky and surprisingly enlightening. I enjoyed this, but I can't imagine it would be interesting to anyone who is not familiar with Portnoy's Complaint or his other autobiographical work.

Sigmund Freud - Leonardo Da Vinci and a Memory of His Childhood: Freud is one of the most important essayists of the modern age... but you wouldn't know it from this piece. Everything that Freud got wrong is on gross display here. Take, for example, how he spends fifty pages drawing wild conclusions about Leonardo's sexuality and parental relationships based on a German mistranslation of his diary (Freud's translation named the bird as a vulture, when it was a kite in Italian, and Freud draws huge amounts of meaning from the vulture's mythological role, etc.) What bothered me most was how much Freud tries to have it both ways. He claims psychoanalysis is a science, but then claims his theories aren't testable and many other interpretations are possible. Important historically, perhaps, but reads pretty silly today.

Rober Burton - The Anatomy of Melancholy: They don't write sprawling, comic, 1,000+ page inquiries into human nature that incorporate everything from science to myth to literature like they used to.
Posted by Lincoln Michel at 10:43 PM No comments: Links to this post

Suggestions for a new phonetic alphabet

It has been announced that the new Pynchon book will be called Against the Day.

In unrelated news, here are my upcoming (??) book titles:


There, copyrighted!
Posted by Lincoln Michel at 2:19 AM No comments: Links to this post

Today's Question: Does the luck o' the Irish cancel out the Irish Curse?

I suppose only the crippled Leprechaun, immobile next to his shining pile of gold, knows for sure.
Posted by Lincoln Michel at 2:10 PM No comments: Links to this post